Trade with the Bearded one

Here are a few cards that I got back in a trade done with the infamous arch nemesis of one thorzul. Yep I did a trade with Beardy who can also be found here in his new joint venture with mojo. I have no idea who is Jerry and who is Newman in this Seinfeldian feud of Beardy and Thorzul nor do I really care! It is amusing to all of us though. I may be a bit jaded as this here Pittsburgh Steelers fan did a favor for a certain fan of the Ravens and backed off of a Nick Markakis card....only to watch said Ravens fan go and lose the bidding on the card. Moral of the story: never expect a Ravens fan to do a damn thing right!
Oh I jest.....onto the trade...this was my eagerly awaited first trade with the world famous baseball card blogger Beardy...and it was worth the wait. By the way...to any other famous bloggers out there who havent traded with me....Lets get it done! I am sure you have some A&G backed minis that I can use! Sorry bout that on to the trade: 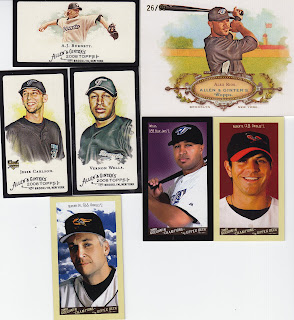 WOO HOO my first Blue Jay ripped card!!! Awesome! I now have at least 15 of the 08 Rip cards(all ripped- of course). Those cards contained among other things the extended mini cards, which I am now collecting, in an oh by the way mention. Someday I will put up some scans of what I have of them. So if you have an extended mini or 2----I am interested in them for sure. He also sent some assorted 08 Ginter minis....I have included a scan of the Jays, he also sent some other A&G backs....but those hit my album immediately so no scans of them. Beardy also sent along a few 09 Goodwins...of which i only have a few, but I do like the ones I have. He sent a black bordered gypsy queen backed Vernon Wells....which I understand and he included a Brian Roberts and a Cal RIPken, which I suppose goes well with the other Rip card.
An awesome first trade no matter how you slice it. So thanks Beardy! I look forward to our future trades.

Hey man, I certainly have Blue Jay for you. Email me at nrmtblog at gmail