Went to the mail box today and this among other things--- this awesome envelope was looking back at me!!! My first package and trade completion from overseas--- Derby, Australia to be precise....AWESOME!!!! Our trade was already covered over at the home of Australia's Foremost Baseball Card Blog, which of course would be Jonathan of RGB Cards. There were also 2 other trade packages as well.... 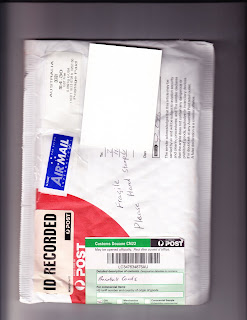 My first package and trade completion from overseas--- Derby, Australia to be precise....AWESOME!!!! My half of the trade was already covered over at the home of Australia's Foremost Baseball Card Blog, which of course would be Jonathan of RGB Cards. I picked out 3 of my favorites from the package that included Jays and Turkey Reds from my wantlist. They are the first row of cards below. My first 2011 card and it just happens to be future ace(here's hoping!!!) and Doc compensation-- Kyle Drabek... and its a gold #ed to 2011-- SWEET!! A 2010 TR Buster Posey, who came up and brought some much needed life to my fantasy baseball team last year! Oh and that strange mini of new found Jays slugger Jose Bautista--- a 2011 Kimball.... MEGA AWESOME!!! and dangit!!! now I need to collect these mini inserts.....so if you dont want the Kimball's-- fell free to send them my way!!!

There were also 2 other trade packages as well.... these are both responses to my Trade Bait post in the second row are a sampling of cards from Greg of Plaschkey, Thy Sweater is Argyle A 2008 Ginter bat relic of Carl Crawford-- btw I have decided to add as many relics and autos from 08,09 and 2010 Ginter, so if you have any of them to trade...let me know and we can try and work out a deal! Greg also threw in some random Jays and some cards from my teams in other sports, including my favorite former Xavier Musketeer--TYRONE HILL!!!! NICE and my all time favorite Jay--none other than Mr Tomorrow I'll be Perfect-- Dave Stieb! Thanks Greg!!!

And the third row is a sample of the contents of my first trade from Alaska from the impressively named cynicalbuddha at Collector's Crack, who got his package mailed out to be before I even got his put together--- so cynical-- never fear the Fielder bat relic is just waiting for me to find some more friends to include to send your way. Needless to say I went all Halladay to represent this trade.....including a relic and a mini and Turkey Red that was also needed from my want list. Many more Jays and minis and a major dent in my Turkey Red want lists were also in the package. Thank you for the trade cynicalbuddha and I hope u are enjoying your trip to the lower 48....and I will get my part of the trade in the mail soon..... 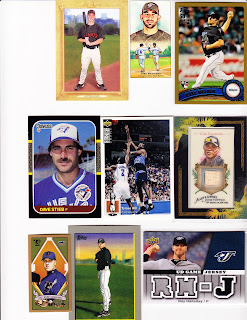 Thanks again Duane, glad you liked the cards!