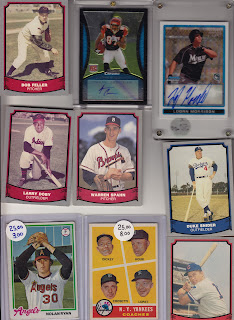 After much delay and the trip to another show....here is the last pic from my trip to the Mansfield Ohio show.  If not for the fact that I had these already scanned in, there would be no more talk of that show.  The Pacific legends cards are all from the one good dime or quarter box...not sure which it was now.  The 2 slabbed cards were the final cards of the $5/ autos from desperate for money guy and the 1960 Yankee coaches and 78 Nolan were both wantlist needs bought for less than sticker price, of course it turns out the Yankee coaches card is one I already possessed so it is now up for trade, make me an offer.

As was mentioned earlier I was able to go to another show this past week, the huge quarterly show at the Franklin County Veterans Memorial hall in Columbus, Ohio.  There I got to meet the world famous baseball dad, who lets be honest is a way better blogger than I will ever be so I suggest you head to his site to read about the show and even view a current photo of the both of us.  It was great meeting Jack and his son Josh, and I am quite hopeful we will get to meet up again.

I picked up a pile of minis from a quarter box $12 worth to be exact, nothing to exciting, gave some to Jack and picked up some various Gypsy Queens to trade so if you are collecting the GQ minis either wait for a trade post or send me a message and I will let you know what I have to trade.  I did take advantage of the many, many many tables of vintage to knock some needs for my 1960 collection including finishing the first 2 pages in the binder.   Now let me just add that a more organized person would remember to bring his lists to a 100 table show, of course I am no such person and as such I left all of my lists at home, but there were a few cards that I could remember that I needed, the 3 missing cards from the first 20 cards of the set: 1 3 18. 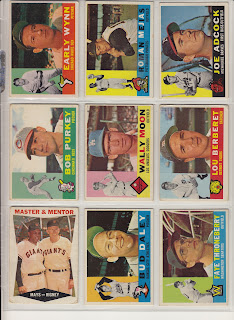 And there they are the much needed #1 Early Wynn and #3 Joe Adcock, add them to the magnificent Master and Mentor card featuring Willie Mays and Wally Moon and that is a nice page of cards.  Most importantly it means that page 1 of the 1960 set binder is now full! 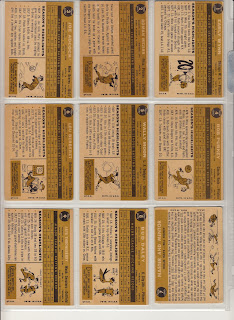 of course I now realize I forgot to rotate these scans before I saved them so they are not so easy to read. My last need for page 2 was #18 the Dodgers team photo checklist, which because you got Sandy Koufax in the team photo means time to pay a premium plus its unchecked so more premium but its now mine and the page is now filled! 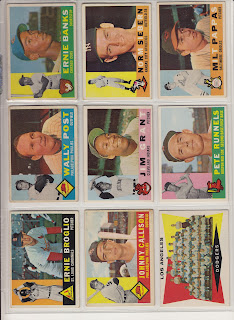 This has to be the most complete page of quality page of players/cards in the set, and somehow Topps managed to get another Wally in the next nine, so yes there is a Wally on each of first 2 pages. Who knew that there were that many Wally's to feature on cards.  Its safe to say that the worst player on the page is none other that Ernie Broglio, well maybe not, best to say none of these are bad players, and hmmm what is that he is famous for.... yep being the player the Cubs got when they traded away some dude named Lou Brock.  The most lopsided straight up trade in MLB history???  I think so. 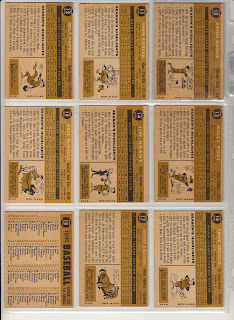 I may have to switch up and go back to hockey in my next post.....  with the horrible start to the Blue Jays season and with the Penguins finally knocking out the Islanders in the first round of the Stanley Cup playoffs....I think it will be more enjoyable to focus on the productive sport for a bit..... of course I my rate I may not post again for a few weeks so who knows.
Until then ....lets make a deal!

Email ThisBlogThis!Share to TwitterShare to FacebookShare to Pinterest
Labels: 1960 topps

I don't know about the "world famous" or "better blogger" parts, but it was a fun show and great to meet up with you !