The long anticipated card in Wooster Ohio came on a morning in which we got coated in a couple of inches of snow.  A more sane person might think well it's not a great show and so it's not worth the 45 minute drive considering the conditions, I however do not think like that!  Of course with my mini wantlists the way the are there is little chance that I would even knock something off them at a card show and that was the case once again.  That, of course, did not stop me from making some purchases and my choices,  I think were better than those at the last show I had went to.
I have noticed people referring to their purchases from COMC as COMC blaster box buys....I love that thought and would like to have a post like that, except my COMC purchases end up more like hobby boxes in that I spend a whole lot more than $20 on those shipments.  I can however refer to this card show haul as my version of a COMC blaster box with tax I suppose as the following cards ended up setting me back $22. 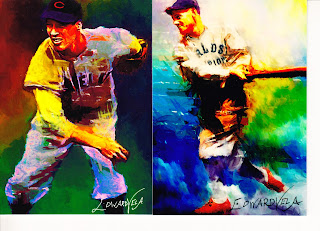 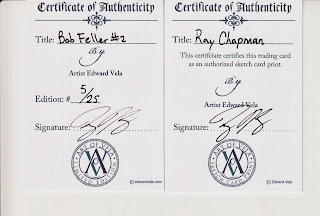 First up are these pair of Edward Vela drawing/sketch cards I suppose.  I had never seen or heard of these things before.  They didnt set me back a whole lot, they looked cool, 1 is a 5/25 print of Bob Feller( I mean, how can I pass that up) and the other is a card of Ray Chapman.  I figured worst case scenario I know an Indians collector or 2 who might like to get their hands on 1 or both these.  Does anyone have any thoughts on these?  Am I crazy for finding them cool? 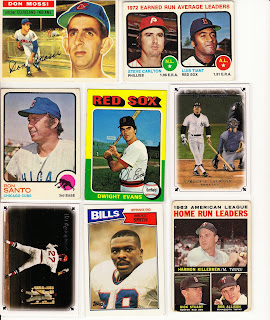 Next up is the most expensive card I bought on the day dropping $8 on the 1956 Don Mossi, which is a 56 that I needed which gets me 1 step closer to 50% of the set and means a want list may soon be posted though I am not sure if it matters seeing as how I was able to pull off 0 trades towards my 1960 set with a posted list.    Oh and I am pretty sure that Mossi is also the nicest condition card in my 56 collection as well.  The rest of the cards are all hauls from a .50 box that got rounded down to $8 for the bunch.  Most are pretty self explanatory HOFers and all  but I should point the Bruce Smith while seemingly out of place-- he is a Hokie so you know I had no choice but to pick it up.  The Reggie and Fisk 08 Masterpieces looking things were picked up because they didnt have the canvass texture like the Masterpieces I know as they were glossy.  After checking with the king of the masterpieces  turns out they were from some special Yankee and Red Sox team sets or some shit.  Paid me a buck to find that out...  I suppose the 75 Dewey is not a HOFer but I think of Dewey as a HOFer soo there is that. 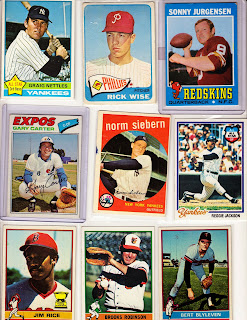 Yep another football card but a 71 Jurgensen can not be passed up for .50.  Same goes for the Bob Lilly down below as well.   Oh and yep I did pick up a Jim Rice card even though I dont consider him a HOFer, most overrated worst HOF selection in many years.  The 65 Rick Wise, well you throw a no hitter and hit 2 HRs in that same game.... well I am gonna buy your card 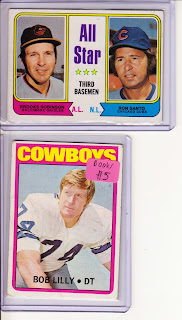 I guess to some up.... this would be why I don't think I will ever be buying another actual blaster of cards... how could a blaster ever match that haul?

Those sketch cards are pretty sweet if you ask me.

And I haven't forgotten my side of our trade. Should be mailing in about a week or so.