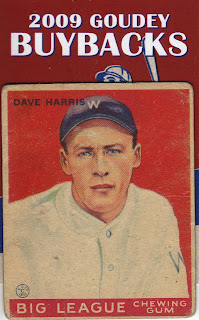 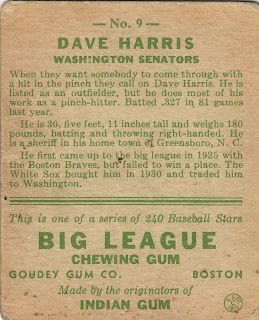 I have a new oldest card. A few weeks ago I had picked up a 1956 Topps Hank Saurer on the ebay, you know one of those impulse combined shipping that looks cool purchases. It was my oldest card beating out some mid-60's Willie Stargell. Not anymore. This delight is my new oldie. I had never heard of Dave Harris but it doesn't matter still an awesome card. I came across this card looking for 09 Goudey SP's and it was being offered by someone who had a good number of lots of the SP's(of which I bought a few). It is suppose to be a buyback and I got the buyback card as well. I would assume this would qualify as a case hit. I know I would view it as such. Including shipping I got the sucker for less that $10. Why in the world am I buying packs of cards? At prices like this I am going to build this entire Goudey set through lots on ebay---I know it will cost less that buying boxes. Oh yeah back to Dave Harris or should I call him "the Sheriff" as the back of his card says he is a sheriff in his hometown of Greensboro NC. He was also a heckuva hitter as that link to baseball reference shows and as I recheck that page I see BR shows his nickname is "Sheriff" so yeah. He was quite the hitter, with a 3 year run of OPS+ of 137, 146 and 142 and a 19th place finish in the MVP voting in the 142 year of 1932--which is really impressive for a guy who was mainly a pinch hitter. Not a bad player at all and an awesome add to my collection.
Posted by Duane at 12:20 PM