Here are the cards I need:

Base:
Done! thanks to Larry the sewingmachineguy

So let's make a deal!

Here is the reason why I posted this wantlist---I got not 1 but 2 packages in the mail today containing 2009 Goudey(among other cards). These were the first cards from 09 Goudey that I have received in a while, so I might as use that as an opportunity to repost the list! The first package from Baseball Dad arrived out of the blue, there one from Drew was to complete a trade we had brokered. I will share more from each of these trades later.

these 3 are from baseball dad....it seems like I am always looking for Cole Hames and Vlad the Destroyer to finish off sets. A note on Miguel Montero.....I actually have his Goudey Graphs card.....so it was nice to finally get the base card..... Thanks Dad and would you be interested in a Victor relic card from 09 Goudey? 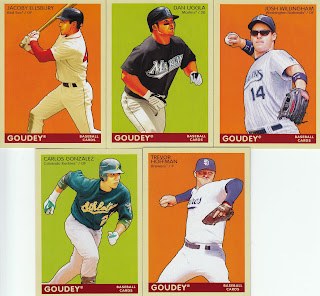 These 5 all arrived from Drew as part of a trade we have just completed. It is the first time for me to trade with Drew, here's hoping we can do some more dealing. Only note I'll make on the cards is that 3/5 of them feature players in their old uni's and that Carlos Gonzalez is, well, kinda good! I picked him up down the stretch for a couple of my fantasy teams, and he earned my approval.
As always let's make a deal!
Posted by Duane at 4:22 PM

Hey dude, glad you got the cards, can you please leave me a feedback comment on this post:

Hope you still needed the cards. Sure I'll always take any tribe cards!! Thanks, Jack

Duane, since I have nearly an entire set of dups, I'd venture to guess I have some of the base cards you need.

I've also got some dups of the 4-in-1s. I'll pull together what I have tonight and shoot you another note.

Mental note - I need an online list of everything I have.