cards from the TROLL

I am working on a trade with the TROLL, who I already was behind to, when he up and sent me more cards. Here are a few of them: 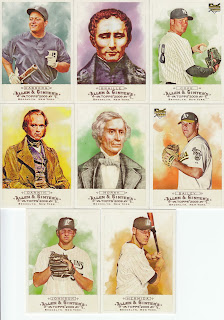 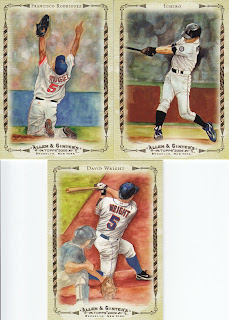 Just a few comments....The 3 highlight sketch cards are just, well, awesome! THe David Wright card is simply amazing, helpless catcher watching the ball head to the seats....wow.
As for the base cards....well they were all cards I needed to finish the set..which is really close to being done, but a few stand out for me. Charles Darwin, what an excellent card of a very important scientist, and he is still pissing people off 150 years later, how the hell can you top that! Samuel Morse and Louis Braille (along with Darwin) are examples of what makes Allen and Ginter so special, the historical figures, I am all about exposing folks to history.
The one baseball player from this baseball card set I would mention would be the Andrew Bailey, who had a lights out rookie season for the A's. He was a saviour for one of my 20 team fantasy leagues. I picked him up early in the season for his holds(yep they were a category for us) and he became my top closer before the end of the year. So here's to you Andrew Bailey. As always thanks to the Troll for the awesome cards--I hope these all were from you---I have another package to show off a bit later.

Here is the updated list of my 2009 Allen & Ginter needs. I have a ton of doubles in the base cards and SPs as well and I have a few mini doubles. Let's make a deal.
Posted by Duane at 10:17 AM

Duane,
So glad that you got the cards safely and that you liked them and needed them. This is such a crazy set to put together. Glad to help anyone out in finishing it! I would be nowhere close if I had to rely on the boxes that I ripped. 4 copies of short prints while I am still missing base cards? Its nuts!!! Good luck my friend!