In my quest to finish mini sets and to find the last 2 base cards(DONE--thanks to Joe at Cobb and Halladay) I realized that I had totally skipped over my need for AGHS12 so I guess I do not have a complete base set yet. I need your help finish that set off.

I have gotten way behind on posting all the great trades that I have gotten in. So bad that my lack of organization has burned me. I had stacks of cards from trades ready to scan....not names or anything I could keep track of who sent what right? RIGHT? WRONG!!! I have lost track.....so I may have to just scrap it.....I may or may not post some of the scans....if you sent them to me hey feel free to take credit! If we have traded and you are not sure if I have received your cards yet, either ask or figure I have because I don't think anyone owes me anything and I have let at least some of you know when I have gotten the cards.

As to the contest winnings I got the Emmitt card from Joe at Cobb and Halladay and it is sweet....it is the first football relic I have ever received. He also sent the last 2 cards for the 09 ginter base as posted above and some 09 Goudey and some much needed 08 Upper Deck base and some 2007 Ginter base set cards. I have included a few here in the picture along with the Emmitt. Thanks for holding the contest, Joe and I am working on getting cards together for you, but I may be a few days on getting it done. 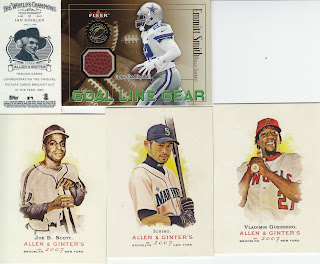 I still cant get over how much I enjoy all the years of the Ginter cards.
Oh I should be having a 1982 Topps want list up soon and since I enjoyed the Masterpieces sets so much, I decided to go for the 2007 Winndsor Green parallel set and the 2008 black border set as well. I have some cards on the way and will get those lists up soon as well. Oh do I now regret trading some of those away in the past. I am thinking of that 07 Green Pujols that I traded.....that will be tough to replace I do believe!

UPDATE___ The base set is done thanks to the generous nature of a certain TROLL!

Thanks again to everyone who I have traded with....as always lets make a deal!
Posted by Duane at 12:22 AM

Those minis, especially the Joe Scott, are sweet! I am pretty into all years of Ginter now... I want to try and finish the 1887 set now... I sent you a package yesterday, but I can get AGHS12 off to you soon so you can be complete... Cheers!

Oh and dont feel bad about losing track of trades, it happens to ALL of us!

Your site has now been added to the Sports Card Blogroll.