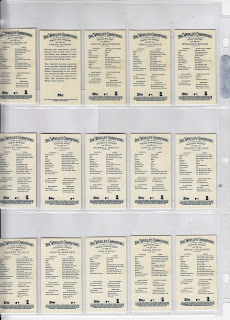 If you click on the image you can see that these are are 2008 Allen and Ginter regular backed minis numbered 346-360. Yep, those are the first 10 of the extended mini set. I have decided to make the attempt to collect the 2008 and 2009 extended mini set in addition to the reg back, a&g back, and half hearted effort to get the black bordered minis as well. For 2008 I have all of the subsets completed as well. I am 4 short on the extinct creatures subset in 2009, and I have all of the other subsets completed including the future inventions set. I have a number of doubles in the extended minis to trade if anyone out there has any that they would like to trade.

I am only 3 cards short of having all 50 extended minis for 2008, the 3 I need are: Matt Holliday, Torii Hunter and Jackie Robinson. This has been a fun group of cards to chase and I will be very happy when I am able to acquire those last 3 cards that I need.

I wish I had the cards to complete your set! But that is AWESOME!