This has taken me way, way,way too long to post and to make it worse it was such an awesome trade. I am so sorry offy for the delay. Here are some scans of the what I would say ate the highlights of a trade from a while back with offy from Offy's Sports Site. Thanks for the great trade. 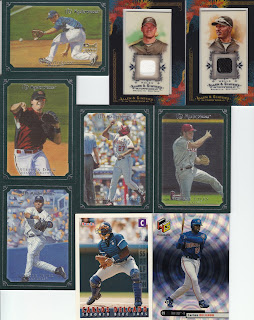 This first group has a couple of 09 Ginter Blue Jay relics....which is something I never got in 08 Ginter--Blue Jay relics....so that is a win. Also handful of bordered Masterpieces......I am always game for Masterpieces especially the parallels! I will take any of them you would like to trade me, for sure. Then to finish off this group a couple of early Carlos Delgado as a catcher cards. I don't have many of these, seeing as how I wasn't collecting during this time frame, and that is my only Delgado in catcher gear card, so, well that is nice. 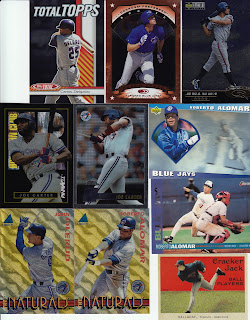 I guess I can now call these a group of former Blue Jay greats. An awesome Cracker Jack Halladay and so much shiny, chromey goodness it hurts my eyes, well not really but you get the picture. I mean Chrome and Turkey Red, that is all kinds of WIN!!! I am still amazed whenever I get a Pinnacle card, those things are awesome. I would have went broke collecting those sets! Oh a Robbie getting ready to slide past Tony Pena for a score and an UD shiny reflecty Alomar that is just cool.

Thanks again OFFY and I will never be this lazy in posting a trade, or at least I hope not.

Oh and I did get some good news this evening, my missing shipment has been found!! It made only took like 3 plus weeks and all because I was an idiot and put the wrong address! U.S. Postal Service for the win........I not so much!

As always lets make a deal!
and coming soon---trade bait!
Posted by Duane at 12:21 AM

Hey buddy, I would like to deal for some of those 89 Score football doubles. I will dig through my collection and pull stuff from your want lists.
Also, if you're a big Pops fan, I have tons of his cards.
Peace.