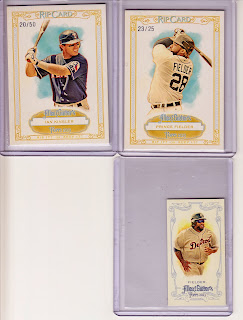 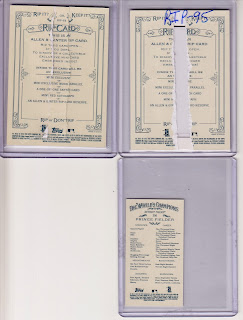 WOW!!! The Tigers and Rangers decided to pull off a fantasy baseball trade.... Prince Fielder for Ian Kinsler straight up-- well not quite there is also $30 million going along with Prince to Texas to help pay for the massive contract Prince has remaining.  A big trade like that requires some big cards to be shown.. so here are the 2013 Rip cards of Prince and Ian along with the Prince Fielder ext mini....  Oh and there is an example of a less than ideal RIP card back on the Fielder RIP.  If only the ripper would keep in mind to just stop and not rip the whole middle strip off.  Of course there are much worse looking backs out there and someday I will show some of those.  Nothing more to add...but dang that is a big trade for this time of the Hot Stove season.

Play at the Plate said...

Now I see what you meant by the back being ripped off. That's terrible.

Oh you aint seen nothing yet.... I will get around to posting a gallery of rip card backs... some will make you sick....