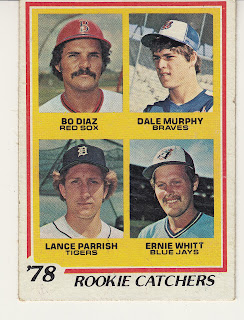 I am on a roll, maybe not a good roll, but a roll none the less, multiple posts in one week and multiple new set want lists in same week.  Don't get used to this, as it will not continue to happen.
I have to ask though; is this the best as in all around no scrub quad rookie card produced?  4 players who all lasted over 12 years, all were an all star at least once, not a bad pick for a rookie by the dude at topps who threw together the rookie catchers back in 78.
Its safe to say Dale Murphy is the worst catcher on this card.... oh wait.... he may have been ok at some other position.  No need to discuss the Murph...  he was great but if I talk about him at all someone may think I am advocating for him as a Hall of Famer, which I am most definitely NOT!   Therefore....Bo Diaz is the weakest of the 4 and he was still a 2 time all star, surprisingly Ernie Whitt only made 1 all star team, but its Ernie freaking Whitt therefore he is no doubt the 3rd best.  Lance Parrish was a top flight catcher in the AL for many years with Detroit and finished with 324 career HRs.
I am sure there are some other stout quad cards, I recall that Piazza and Carlos Delgado shared a quad card as well, though I cant recall the other 2 catchers on that one.  Sure its not as good as the Nolan Ryan/Jerry Koosman powerhouse rookie card, but that was only a 2 player card. Enough of that here is a partial listing of my 78 topps needs.  The quest for the 1960s has taken over my time but I saw this card and figured I should post it and get a partial list up.
I have tons of 78 doubles especially commons, as I have made a couple of purchases of large sized mostly common lots.  Which means if you are short a few scrubs for your set, I probably have a dozen of those cards... at least... so by all  means ask me about them.